skip to main | skip to sidebar

Continueing the old interviews idea and since the summer is still far from over and everybody should be at the beach. Here´s an interview done with The Mobsmen for City Trash #31 in 2008. A year later they would surprise us with one of the best surf records in years "Scelerats Syndicate" on the Double Crown label. 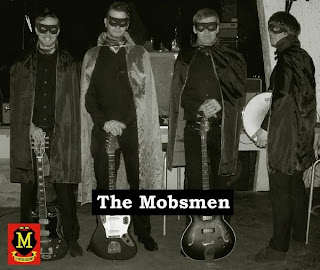 INTERVIEW WITH SIMEN MOBSMEN:
Because The Sealions are an amazing combo and the Indikation were a great group releasing a terrific album and a bunch of excellent 45s, I was glad to hear the recordings of a new band called The Mobsmen featuring two people of the aforementioned bands. A thrilling surfcombo was the result of their joint efforts, and after witnessing them live last year in Oslo I knew it was time to ask Simen some simple questions.

Who are in the Mobsmen?
Peter rhythm guitar, Thomas drums, Bjarte bass, me lead guitar
When did you start?
Maybe 2005, talking with Thomas about starting a band. I was living in the same flat as Bjarte and he´s interested in sixties so he wanted to join, Peter started last fall.
What made you decide to begin a surf combo?
Thomas played in the Indikation and he wanted another type of sixties band and I didn´t have a band at the time.
Did you play in other bands than the Sealions?
No in Norway just some projects.
What kind of projects?
More like ad-hoc bands for special occasions, like wedding bands for weddings, horror bands for Halloween and that kind of stuff.
Do any of the others play in other bands?
Yes, Bjarte plays in Peter Berry and the Shake Set, and Thomas is working on this 66 fuzz garage act that probably will materialise soon. 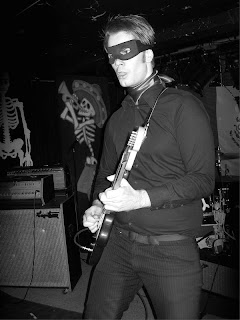 Do you write most of your own songs?
The songs with vocals are mostly original. The instrumentals are a lot of covers, but probably about half are originals. I think we actually play more the originals than the covers now, but it’s taken a while before we reached there.
What covers are on the setlist?
Let me see, nowadays we do Similau (Surfaris), Mar Gaya (Fender IV), Contact (Pyramids), a surf-version of Flamenco (Los Brincos), plus obvious standards like Misirlou, Hava Nagila and Squad Car to get the kids going. We’ve done several others like Burnin Rubber (Gene Moles) and Storm Surf (Surfaris), but they’ve had to make place for originals, so we don’t play them so much any more.
Of the vocals we do You better tell me now which is actually the b-side of Mar Gaya, plus Kanamam by turkish beat band Mavi Isiklar where we try sing in turkish.
Why did you add vocals to the surfband?
It´s a little to try to attract a bigger audience, cause for some reason many people lose concentration when they have to listen to only instrumentals for more than half an hour, but the main reason is because we like to play those songs.
Who writes most of songs?
I’ve written most of our songs with the exception of one instrumental that Thomas wrote.
Did you play a lot?
17 gigs with the 18th to be played late in july.
All in Oslo?
All yes, we had an offer to play in Fredrikstad, but we hesitated for too long so now their schedule is full all year long .
What´s a good place to play in Oslo? Any wild stories?
I think the best stage is at a place called Gamla, but I guess our favorite place is where we rehearse, cause then we don’t have to load the equipment after the show.
Wild stories? I don’t think so. I wish there would’ve been, but it’s mostly tales about getting too drunk after the show. I think the most crazy thing that’s happened was when a string on my guitar fell so out of tune that it dropped an entire octave to fall back IN tune again. That was spooky!
How about outside of Norway?
We´re might go to Sweden to play with the Barbwires. We are not used to touring because then we have to organize more. We’d love to play in Holland though, because of the familiar atmosphere here. Always good to be back “home”.
The songs now are recorded in your rehearsal room, any plans for some real recording?
We ´re going to record in August, in Oslo. A guy has there a studio suited for sixties records
Do you know who is going to release it?
No that´s still open
The sound is very good eventhough it was not properly recorded, especially the vocals are amzing. Was this common amongst the early surfbands?
Most bands did it, but most vocals are standard frat rock or rock tunes or covers, like Surfer Joe or some simple version of Beach Boys songs but you had some bands that where good at it like the Chantays.
You songs are not like the Beach Boys?
No, the genre is more typical generic mid sixties beat sound a la ´64. Not like a specific thing like the Mersey-sound or the Minneapolis-sound, or the Seattle-sound or the South Bay-sound or anything like that. Just songs, you know. Music with words to it. 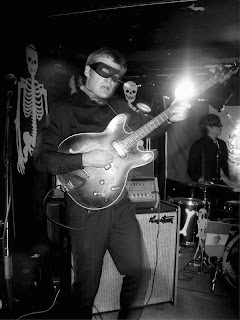 What´s with the masks when you perform? ZZ & the Maskers perhaps an inspiration for the Mobsmen?
The idea about the masks came the night before we were going to perform at a birthday party, and we wanted something a little extra that would give us a trademark look. I had been thinking about it a while beofer also, like an all black attire with a color accessoire, like a badge, or a belt or something. On top of that we found out that crook masks on top of that would give something that would be easily recognized. So we did. That red scarves we had a little problems to find, so we ended up in an Indian textile store where they had some fake red silk that suited our idea very well.
Since the Mobsmen seem to combine the best of surf and beat, what are you favorite 5 beat songs and 5 surf songs?
Whoa, that’s tough. When you say beat, I guess a lot of people probably think of Mersey beat, Beatles-style, but beat I guess, is just genreless songs with a distinct 60s sound. You know, a little mix of everything: rock, doo wop, country, vaudeville, pop, folk etc melted together into a Fender or Vox-amp with a twist beat plus some freaked out vision of world dominance. So for me the question would be more: what are your favourite songs. At the moment I’ve been listening a lot to Bobby Fuller Four, so I’d lump Let her dance into that list. I’m also a big fan of Everly Brothers version of Pretty Flamingo at the moment. Johnny remember me with John Leyton is also wicked. You better tell me now(Fender IV) should be in there too, as should N'écoute pas les idoles with France Gall.
The surf-list is a little easier to make: El Gato (Chandelles), Mar Gaya (Fender IV), Failsafe (New Dimensions), Surf Party (Astronauts) plus lately I’ve fallen completely in love with the titlesong on the latest Tarantino movie Death Proof The Last Race (Jack Nitzsche).
Any current act you enjoy and are close to the Mobsmen sound?
I must admit that I don’t really listen a lot to current bands currently outside of concerts, but I do see some similarities in the approach the Krontjong Devils and we have.
Well can´t wait to hear the recordings of the Mobsmen on a proper record. Any final comments?
If you buy us a beer before the concert the chance is much greater that you won’t lose your wallet during the show! We prefer to have friends, but have a pragmatic approach to enemies.